Get special offers, exclusive product news, and event info straight to your inbox. 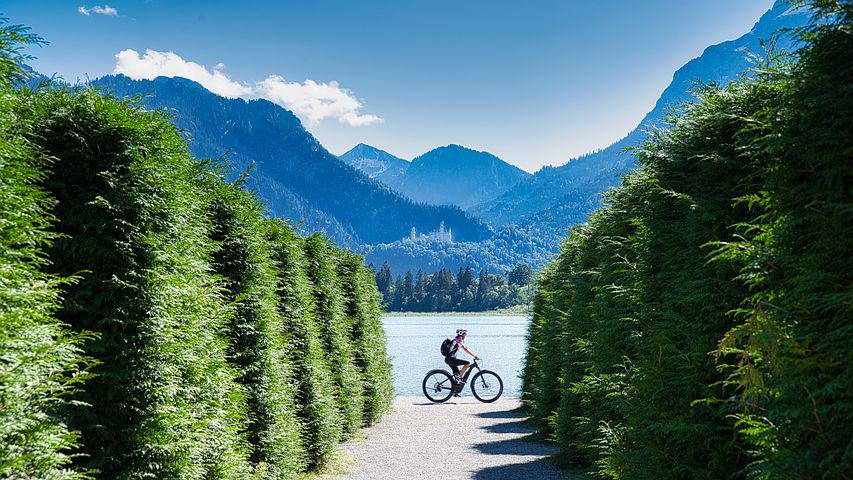 If you have an e-bike, you may have discovered that it’s not going as fast as you’d like. That is not a problem at all. There are several ways to make your e-bike go faster, even if the motor already goes as fast as it can.

Get $50 off your first order

The best place to start when looking to make your E-bike faster is by changing the motor, which can be done in two ways. You could change the whole engine out and replace it with one with more power or add additional batteries to give it more amps, thereby giving you more control. However, if you want to know how to make your E-bike go faster, continue reading the significant steps listed below.

1. Replace the Tires on Your E-bike.

One of the ways you can make your E-bike go faster is to check the tires you have on them. If the tires are old, you should consider changing them. They may have reduced efficiency due to wear and tear from use over time. New tires can make your e-bike go faster, since they are still new and haven't experienced wear or tear. 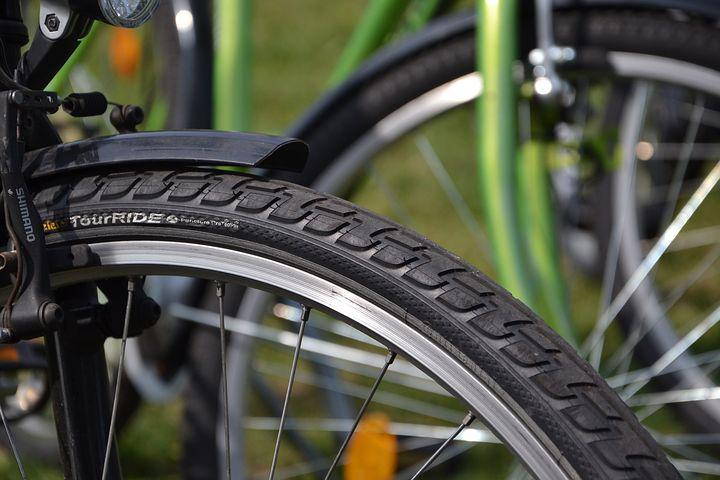 2. Ride With a Fully Charged Battery at All Times.

When your battery is fully charged, it produces the maximum voltage. The voltage lowers as the battery empties. A fully charged Lithium cell generates 4.2 volts. At 50% charge, it produces 3.6 volts and, when drained, has close to 3 volts. Your bike will accelerate quicker at 4.2 volts per cell than at 3.6. If you want to ride faster, charge your e-bike batteries before riding.

Also, it is important to know that you may not be able to make an e-bike go as fast as a regular bike, but having a fully charged battery can be of great help in making your e-bike go faster. To achieve this, your battery should be charged at least once or every other week, depending on your use. Having a fully charged battery will also ensure you don't run out of battery life while riding. 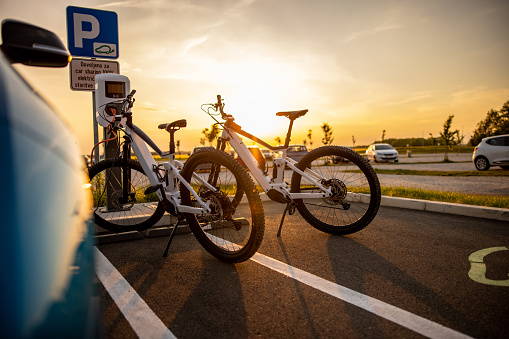 With the proper maintenance, you can increase the lifespan of your battery and get a lot more juice out of it. You can keep your battery cool by storing it in a dry place away from heaters or direct sunlight. If you are traveling with an e-bike, use a portable cooler. This will help keep the battery cool while not in use. If storing an e-bike for an extended period, charge it at least evergreen for three months. This will help maintain battery life and avoid any possible damage if left uncharged. 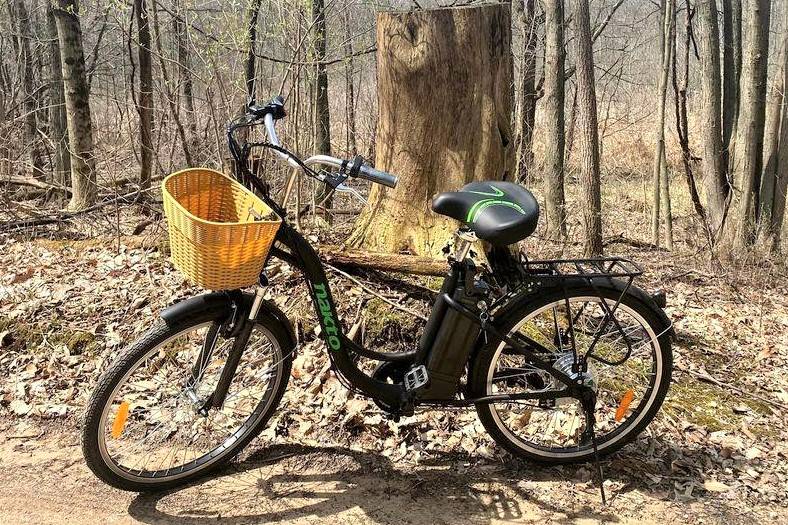 Crouching allows for a more streamlined riding position, reducing the air resistance you face. When your body is streamlined, you can travel quicker in the face of headwinds, and your bike will not be pulled down.

When elite cyclists compete in a velodrome, you may see this firsthand. They often stoop to reduce air resistance and the effort required to pedal against it. As a result, the bikers travel quicker than a person riding in an upright posture. However, if you have any existing back problems, you should reconsider using this approach; you don't want to worsen the pain, do you? 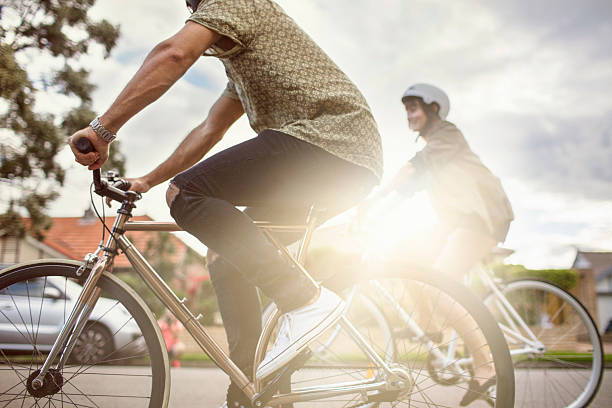 Another straightforward way to make an e-bike go faster is by reducing weight. Some people remove the battery and replace it with a consequence they can carry. This reduces the bike's total weight but leaves you stranded if something goes wrong or you need a boost in energy.

The next option would be removing any items that are not necessary, such as water bottles or luggage carriers. Taking off these items will reduce weight and make the e-bike easier to pedal. If this does not seem enough for you, adding lightweight wheels or new tires could also help. Remember that this may result in poorer traction, so keep them away from slippery surfaces like sand or ice. 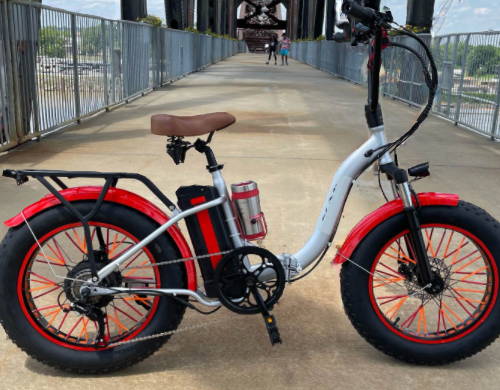 Tuning brakes can make a massive difference in the speed of your e-bike. It is worth adjusting these properly if you have used a disc brake system. You must ensure the pads are not rubbing on the rotor, or else they will wear down quickly and could even start creating dangerous sparks. Disc brakes must also be set up to align the calipers with the rotor. This way, they can get better leverage and apply pressure more consistently. Adjusting brake pad material thickness is another good way to help increase brake power on an e-bike, especially if you are going downhill or riding in many wet conditions. 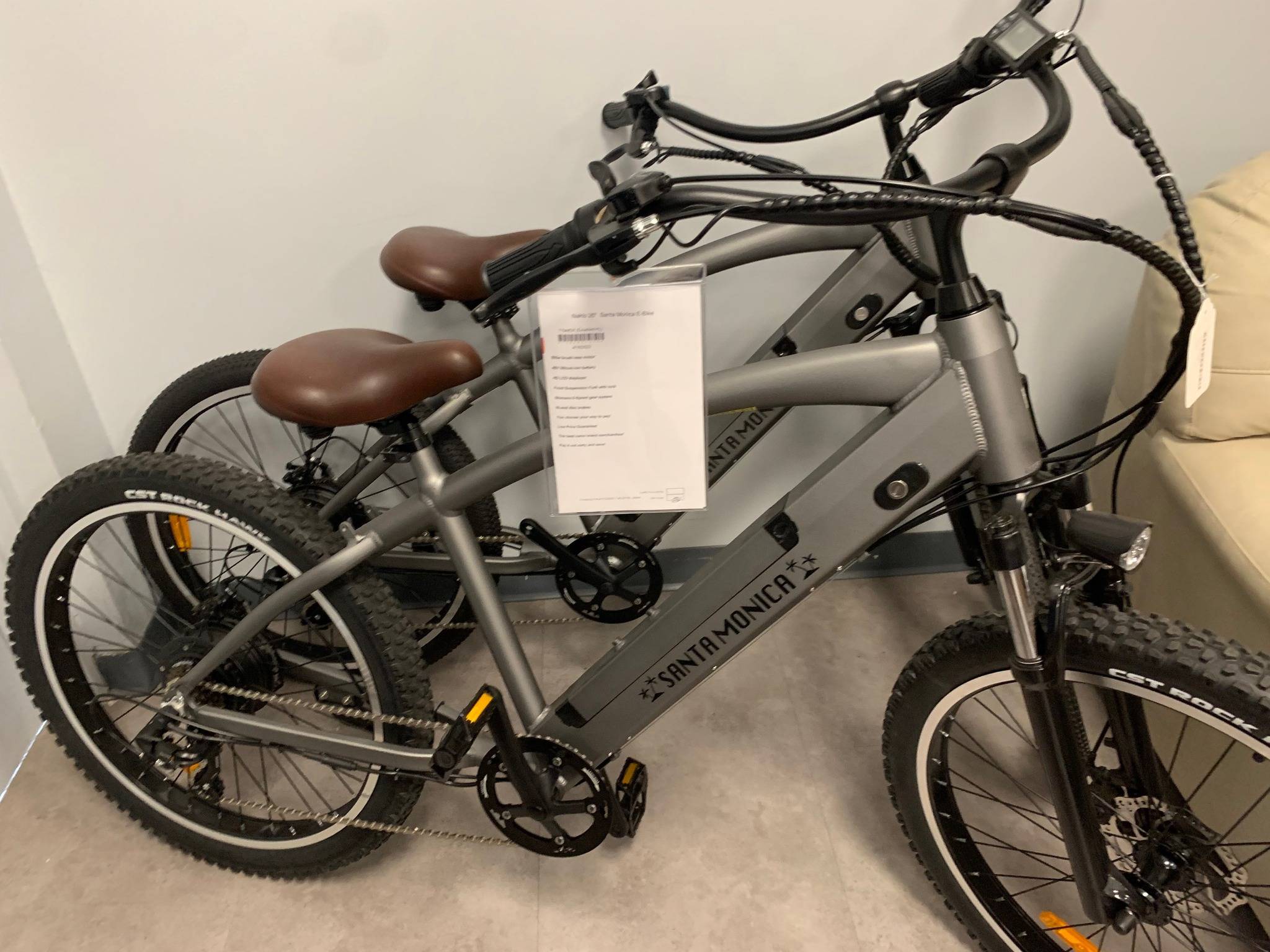 7. Use Tires That Are Smoother And Thinner

Using thinner tires is another excellent approach to obtaining fast speeds. This is why top riders in the Tour de France ride bicycles with skinny tires. The idea is that smaller tires minimize drag and hence the amount of energy required to propel the bike ahead.

So, if you have an e-bike with wide tires, consider replacing them with narrower ones. Aside from riding on thinner tires, you may also choose a smoother pair to make your bike glide like a pro. While thick treads on the tire boost your grip on the road, they also work against the incredible speed you desire to achieve! Assess the tires on your e-bike and replace them with smoother tires if you believe they are more suited for usage on a mountain bike. 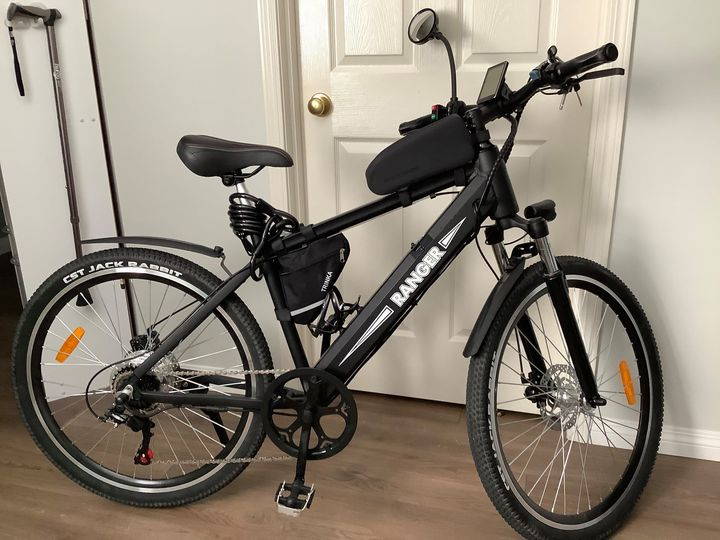 Did you know that the average person's bike spends 97% of its time not being ridden? This means there are a lot of bikes out there that could use a good cleaning. The easiest and quickest way to get that bike looking and feeling like new again is by giving it a good scrub.

Start by removing any mud or dirt from the tires with water and a sponge. Next, use soap, water, and a scrubber to clean the frame. Please pay close attention to all the nooks and crannies, as it is easy for dirt to get lodged in them. Rinse everything with water before drying it off with a cloth or towel. A quick wipe-down with an alcohol-based cleaner will also help kill bacteria. Finally, lubricate the chain and any moving parts, so they work smoothly. If you want to give it an extra shine, apply a thin layer of wax on top of the cleaned surface. You'll be riding brand-new wheels in no time! 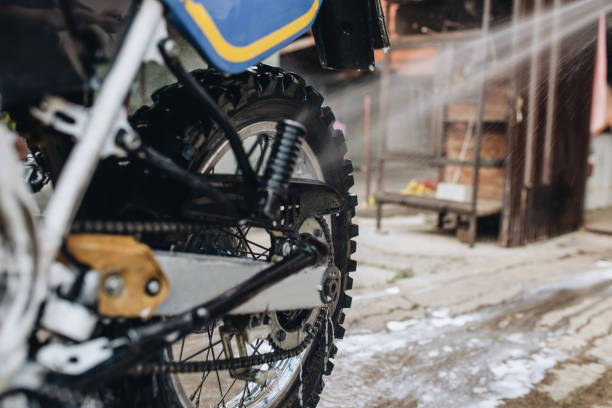 9. Why You May Not Want To Increase E-bike speed

You’ve probably heard that E-bikes are not as fast as regular bikes, which can be both good and bad news. For starters, if you live in a city with a speed limit of 30 km/h or less, having an E-bike will allow you to commute without breaking laws. This can be especially useful if you want an early start or plan on getting some exercise on your way to work. Here are reasons why you may not want to increase your bike speed.

The increase in e-bike speed can lead to an increase in the risk of injury. This is because the bike's top speed increases and has the potential for accidents. For example, a rider might be going 20 miles per hour (MPH) down a hill when suddenly they lose control of their bike and crash into something or someone.

E-bikes are a popular mode of transportation; for a good reason, they’re a convenient way to get around without worrying about traffic or parking. However, recently companies have been pushing for regulations that allow e-bikes to go faster than the current 20 mph limit.

Remember that the engine will not assist you in accomplishing these high speeds; your leg muscles will carry the whole burden! This means you'll have to push your pedaling to its limit, which may harm your muscles. There is a risk of injury, which detracts from the enjoyment of electric bicycling. If this is what you wanted, why did you abandon your ordinary bike? 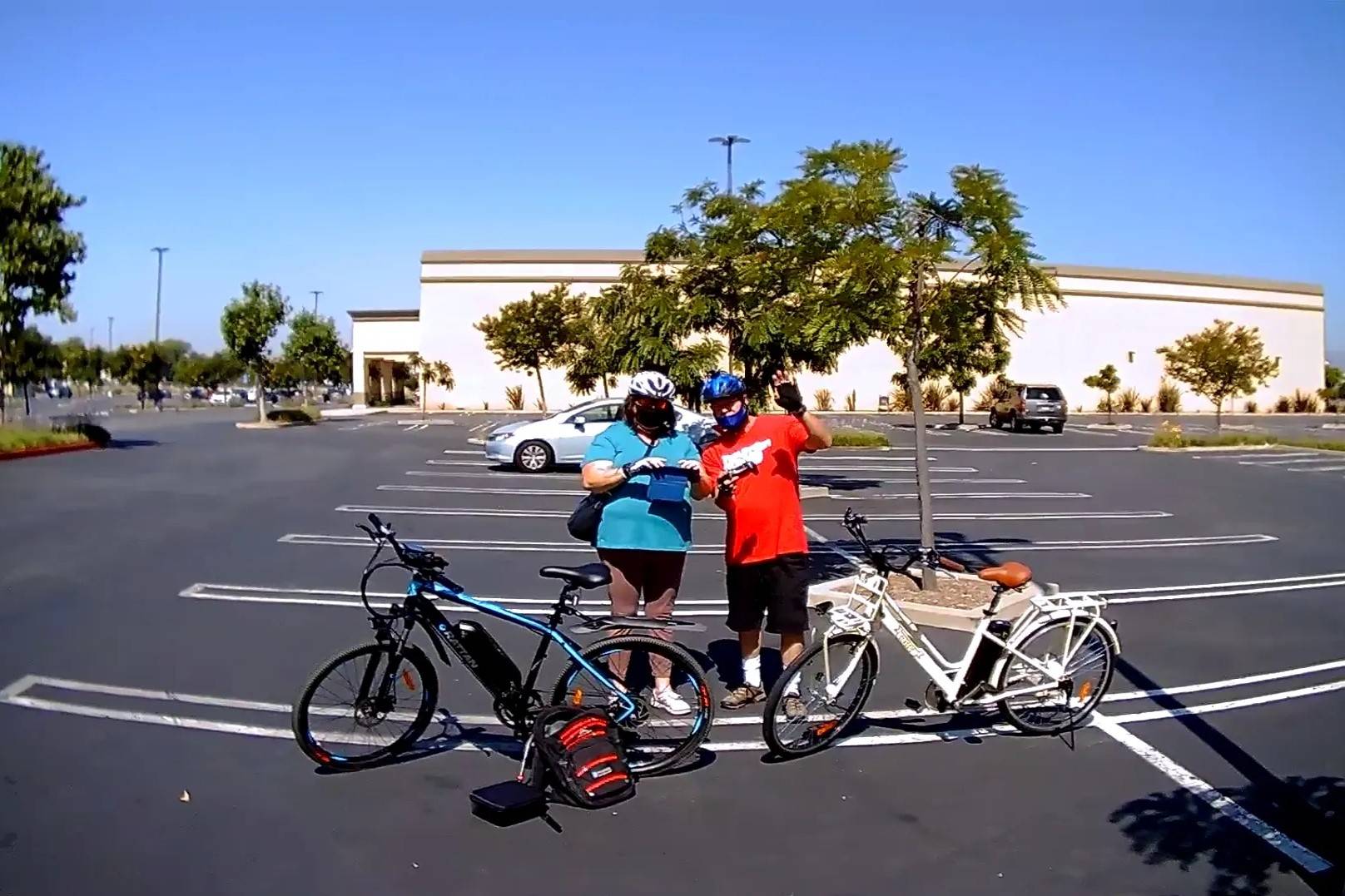 1. How To Increase The Bike's Range?

Range anxiety is one of the most common complaints about electric bikes. No matter how far you pedal, the battery will eventually run out and leave you stranded. The good news is that you can do a few things that will give you a little more range per charge.

The first thing to consider is how much power you use with each pedal stroke. If you're not pedaling hard enough, your bike will use less energy than if you were riding at full speed on flat ground with a heavier load on the back rack. But even if it doesn't seem possible, try to increase the pressure on the pedals - this should help get more miles out of your battery pack before needing a recharge.

E-bikes have become a popular choice for commuters in the past few years. They offer a great alternative to traditional bikes and can be used on multiple terrains, but just how fast do they go? The average speed of an e-bike is around 15 miles per hour, with some models going up to 20 miles per hour or more. Depending on the model of the bike and the terrain you're riding on, you may not hit that top speed very often.

3. How Do You Remove The Electric Bike's Speed Limiter?

The easiest way to remove the speed limiter on an electric bike is by installing a controller that can adjust its power output. It's not hard, but you need a few special tools and extra time. The first thing you'll need is a suitable car and controller output.

Once you have it, you'll want to take apart your bike by removing the throttle, battery, and any other components that might get in the way. Next, detach all wires from the motherboard and set it aside, so nothing gets bent or damaged. Now locate where the limit switch for your bike is located on the frame and unscrew it from its place near where it was attached.

4. Can You Hack An Electric Bike To Go Faster?

The average electric bike speed is 12 mph, which is about the same as the speed of a bicycle. Hacking an electric bike to go faster can be done with a simple tweak to the motor. Be careful when tampering with the engine, though. If you're not experienced in doing this type of thing, it could cause damage to your battery or motor and make it stop working.

There are a few ways you can make your e-bike go faster. The easiest way is to put in new batteries. You can also put on a better set of tires, thereby increasing the speed. You can also buy a more powerful motor which will allow the bike to pick up the pace more quickly and maintain it for more extended periods—changing the gears helps. Lastly, upgrading the braking system might be necessary if there's an issue with speed loss during break time.

There are a few ways you can make your e-bike go faster. The easiest way is to put in new batteries. You can also put on a better set of tires, thereby increasing the speed. You can also buy a more powerful motor which will allow the bike to pick up the pace more quickly and maintain it for more extended periods—changing the gears helps. Lastly, upgrading the braking system might be necessary if there's an issue with speed loss during break time.

Free shipping to all addresses in the 48 continental U.S. states via UPS Ground.

All NAKTO ebikes are covered under our 1-year warranty for the original owner.

Ordering online and your bike will be completely assembled and ready to pick up in-warehouse.